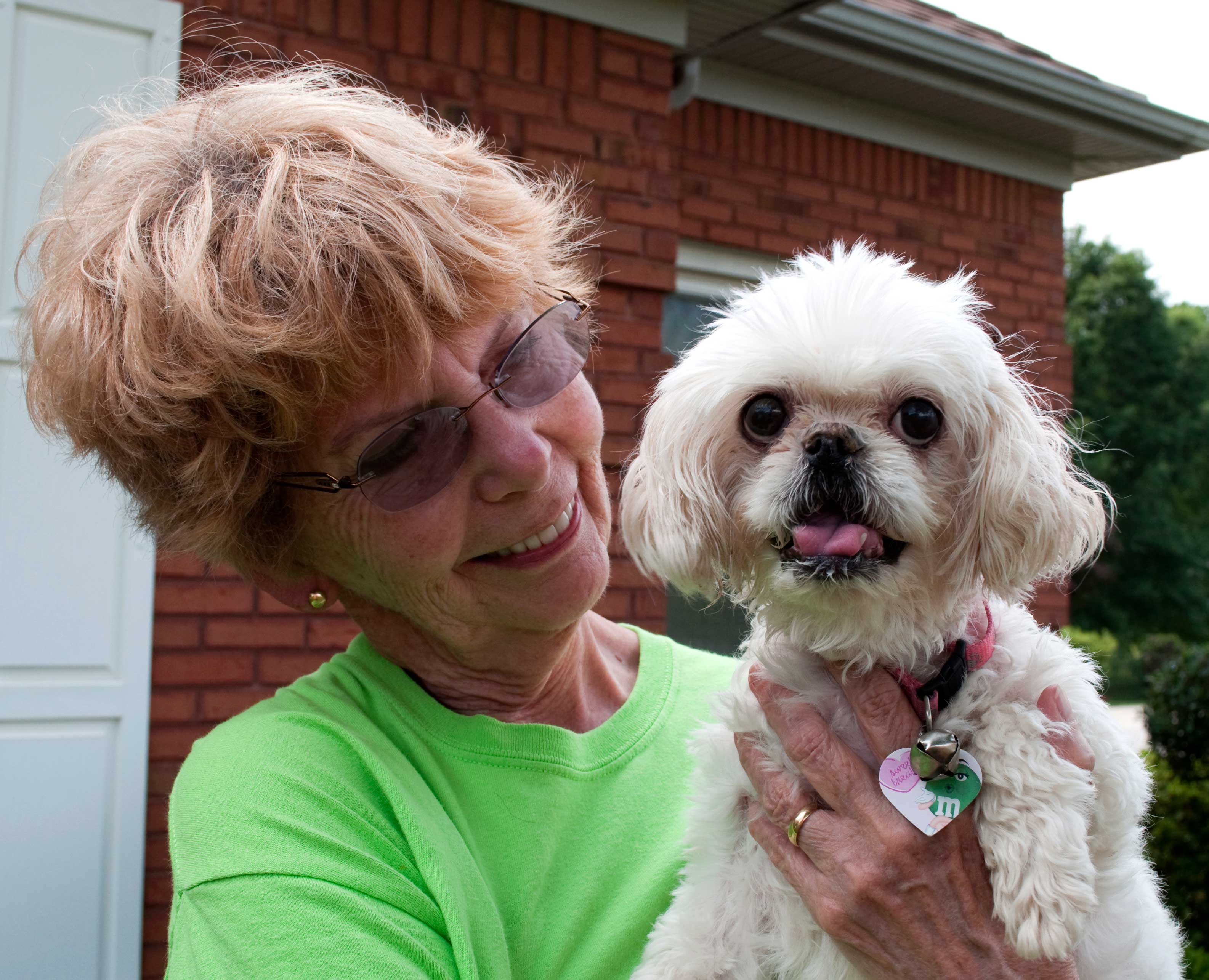 It is with great sadness that on October 2, 2013, our little Lulu crossed over to the Rainbow Bridge.  She beat the odds and blessed us with many more months than they expected.  They say there are Angels among us and she definitely had her own.  Bless you Tammy for the wonderful love and care you gave Lulu.  She will remain in yours and our hearts forever.

"Every day with her was special"

I find myself compelled to write this story about Lulu because there is so much deception in our society today.  We hear about phone scams  and phony sales gimmicks all the time.   So much  that we have programmed ourselves to have our guard up on every 800 call that comes up on our phone.  But do we ever stop to think that you could get scammed when we are looking to add that warm and adorable four legged companion to your family?  Let's meet Lulu.

It was just a normal busy day and I was occupied in the back with one of our dogs.   Two ladies came in the front, carrying this small bundle, asking if Peace, Love and Animals could take the little dog in the bundle.   The volunteer that was assisting her told her that we were full and were not able to take in any dogs at this time.  But the younger of the ladies was insistent.   "Please,  I had gotten this dog for my daughter for her birthday but it didn't work out and I can't take her to a kill shelter, Please take her".   So the volunteer came to get me to see if there was something I could do.

When I approached the little dog in the bundle, my first thought was something was wrong with this dog.   But I needed to hear her story first.  The younger lady told me that she gotten this dog from an Ad in a "popular listing".  She was very excited about getting a Shih Tzu for $50 because her daughter had always wanted one and it was her 8th birthday.  The woman that was selling the dog told her she was spayed, 6 years old, in good health, and great with kids.  But since the seller lived so far away, she would meet her in the parking lot of a nearby store to do the exchange.    When the younger lady met the seller it was late in the evening and dark.  She saw the dog with her tongue hanging out and just thought that was cute.  The seller told her that they all did that.  She had her wrapped in a blanket with a bow in her hair.  The seller handed her the dog, took her $50 and left her standing there with a dog she had only met for 5 minutes.  This was the beginning of her nightmare.

The younger lady took her little bundle home to surprise her daughter for her birthday.  But this little bundle didn't like children and bit the child.  They tried several times, hoping the dog was just nervous, but finally realized there was no hope, and this is how they ended up at PLA.   So I asked if I could remove the blanket and examine the little dog.  My first glance went straight to her eyes.  They were very milky and white.  I was afraid of cataracts or severe dry eye syndrome.   Then I opened her mouth.  I was shocked.  This poor dog had only 3 or 4 teeth.  That is why her tongue hung out.  She had no teeth to hold it in.   Then I noticed that one side of her face was very swollen.  I turned her head to the side and noticed that just behind her left ear was a very large knot, almost the size of a tennis ball and it was trying to drain.  This could be a tumor or limp nods or even cancer.  It did not look good.  I laid her on her back to look for a spay scar but instead found numerous mammary tumors.  If she had been spayed, she would not have mammary tumors.   So that answered the question that I was pretty sure she was not spayed.    As I began to point out all these things to the younger lady, she began to cry.  She told me that she felt so dumb.  Why had she not thought to do the same thing that I had just done?  Why had she not thought to look the dog over before she paid the seller?  She then realized that she had been scammed.

So now what do you do?  I told the younger lady that she needed to take the little dog to a vet to see just exactly everything that was wrong with the dog.  But I knew when I said that, she didn't have the money by the look on her face.  So I called our vet and made an appointment.  PLA would pay for the visit.   My heart was already involved and it was obvious this little dog desperately needed to see a vet.   A few hours passed before I finally received a call from my vet on the exam of the little dog we had called Lulu.  I had to find a chair and sit down because the news was worse than we had ever expected.  Where shall I begin... her eyes were good news, not cataract but very severe dry eye syndrome.  Her teeth were missing due to bad dental care but there wasn't much that could be done about that.  It was confirmed that she was not spayed and she did have several mammary tumors that needed to be removed and biopsied to rule out possible breast cancer.  The knot on the side of her neck turned out to be a large infected abscess.  It needed to be drained but that turned up another problem… her heart.  She has a grade 6 heart murmur.  Heart murmurs are graded 1-6, with 6 being the worst.  Every time they would try to restrain her to drain the abscess, she would turn blue.  They had to stop.  They realized that her condition was very frail.  The seller had told the younger lady that Lulu was 6 years old.  Our vet firmly believes that Lulu is closer to 10 years old.  With all of the problems and age, the vet also believes Lulu has arthritis in her hips that causes a lot of pain in her normal movement.  This could be why she was snappy with the younger ladies’ daughter.  Children do not know how to handle older dogs, especially when they are in pain.  So, the younger lady left Lulu in the care of our vet that day and Lulu joined the family of PLA.

With a bad heart and mounds of health problems, life in our shelter would not have been a fit for Lulu.  Blessed as we are for one of our Directors, Tammy, who took Lulu home to live with her.  This was not an easy task, for along with Lulu came bags of medication, special diets, medication schedules, adjusting a new dog into your home,  and living with the reality that you are falling in love with a little dog that is walking a fine line between life and death.   But Lulu settled in to Tammy's home to heal.  As time passed, the abscess on her neck cleared up and her eyes began to sparkle.  Lulu has always had a good appetite and now that she was on good prescription food she was putting on some weight.  Lulu even went to see a canine heart specialist in Huntsville and got a good report from her.

Months had gone by and Lulu had been doing very well, so we felt it was time to do her surgeries.  She needed to be spayed, her mammary tumors removed, and she had several small cysts on her head that were going to be removed all at the same time.   The big day was set and preparation was done.  Because of her age and heart, all precautions were taken.  But only minutes into surgery, things began to go wrong.  Her heart rate was falling.   They had to stop and bring her back.  They started again.  Problems again, they were losing her... they stopped and were able to bring her back. We had only hoped that Lulu was strong enough to have the necessary surgeries but this tiny little girl was fighting for her life.  Surgery was cancelled.

But Lulu's story doesn't end there.  We had accepted the fact that we couldn’t spay her, we couldn’t remove her mammary tumors, or the cysts on her head.  We just had to pray that nothing bad would become of these things we couldn’t fix. Unfortunately, another problem arose. Her foster mom noticed a knot that seemed very out of place on her and a new trip to the vet revealed sad news once more.  This time it was cancer....

Lulu is special and every day with her is special for we do not know how many more days we will be blessed with her.  She will always be a very high risk, frail little girl.  But that doesn't stop the love.  Everything happens for a reason and when Lulu came in our door that day it was meant to be.  With all the issues this poor little girl has, there is no doubt in my mind that she would have either died from a heart attack or ended up in a kill shelter.  She deserves peace in her final days and she has found just that.  There is no better place in this world that could give her the love, care, and comfort that she needs than in Tammy's arms.  For all you do, God Bless you Tammy...

If you are interested in making a differnce in a dog's life, just like Deacon, please This email address is being protected from spambots. You need JavaScript enabled to view it. for more information or go donate.