I received a call from a Good Samaritan late last Thursday, asking me to take in a stray dog that had been hanging around her house. We get dozens of these calls every week and sadly we cannot help them all for we are so limited on space. But I could really hear the concern in her voice, so I began to question her further. “He’s really sick and so skinny; I know that anyone else will put him down. I have been feeding him just trying to keep him alive. Please, I have heard that you are a no-kill rescue”. To hear how much love she had put into this guy, I knew I had to help her. When I told her that I would take him, she was so excited and responded, “I will bring him to you!” My next question was to find out just where she would be coming from and I was totally amazed when she told me Tuscaloosa, AL.

The next challenge came with finding him again. With this unbearable Alabama heat, it appears that he had found shelter to hide out in the day and would come out at night to prowl for food. On Saturday evening, he visited his Good Samaritan for another meal, not realizing that his life was about to make a major change. Oddly enough, he was wearing a collar with the name “Deacon” engraved. The name seemed very fitting for him, so Deacon he will remain. So, early Sunday morning, Deacon arrived at Peace, Love and Animals to become a part of our family and to begin his road to recovery. 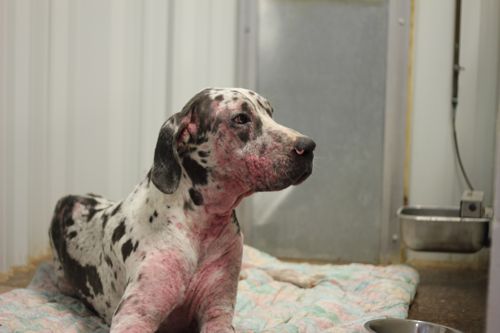 Monday morning, we are sitting at the vet’s office. My heart breaks for this guy. Everyone is the lobby is staring at him. Some are even brave enough to come over and ask what is wrong with this dog. He barely has any hair; his skin is flaming red with open sores and scabs covering most of his body. The worst is his face, swollen and looking as if he is 100 years old. His body is hot to touch with fever. You can tell by the stares from some of the people there that they can’t believe that I am caressing and loving on the hideous creature. After many tests and an exam from the vet, the news is heart breaking. Deacon’s life is complicated. Just as I had feared, the skin issue is Demodectic Mange, the worst kind. He also has yeast infection in both ears, hook worms, and sadly enough, he is heart worm positive. I just don’t think there is anything else that this poor guy can have. But, on a good note, he is only around 18 months, so age is in his favor! The doctor and I had a long discussion about the best way to treat Deacon. Demodex and Heartworms cannot be treated together without a very high risk of death. The treatments will work against each other. So, even knowing how evil heartworms are, we are going to put off that treatment until we cure his mange. This will give Deacon some relief from the horrible skin issues first. But time is important so we are going after this mange hard and fast. He will be given daily medication for the mange, medication for his ears, and also antibiotics. There is a topical treatment that is applied every other week for the mange and a medicated bath every 3 days. He is going to be a busy guy! We have him on a special diet that will help him to gain weight and support his immune system while he is going through all of these treatments. Lucky for us, he is such a sweet and gentle fellow and he loves all of this attention!

The American Kennel Club describes the Great Dane as “regal in appearance, dignity, strength and elegance with grand size and a well-formed body. One of the largest working breeds, it never appears ugly”. I look at Deacon and I see a beautiful noble giant. His tender eyes will look so lovingly at you and he knows he is safe. He knows we are here to help him as he lays his massive paw ever so gently on my knee as to say “Thank you”. Deacon’s journey will be a long one, but in the end awaits nothing short of a majestic noble Dane.

If you would like to contribute to Deacon’s Journey, please donate or This email address is being protected from spambots. You need JavaScript enabled to view it. for more information